McGuffey’s Readers series is one of the most popular textbooks of the nineteenth-century common school era. With over 122 million copies sold since 1838, the McGuffey Eclectic Readers linked below taught more Americans to read than any other textbook. These set of readers were written by William Holmes McGuffey who was born in 1800 in Pennsylvania. By combining the McGuffey family’s emphasis on education with the importance of ethical principles, William was able to create these readers, which were said to help “shape American character.” McGuffey’s Readers focused on practical consequences children might experience here on earth for lacking in kindness or productivity. The lessons emphasize correct English grammar, as well as a religious belief and a strong understanding of what an American is.

The exercises are still suitable, and perhaps more helpful than some contemporary alternatives. Explanations provided are enough to get started teaching a child to read and write. Reading these texts out loud is a great activity to increase oral reading efficiency into your homeschool learning day. Repetition is important, as it builds fluency, expression and delivery, and helps the student become comfortable with the text. Two particular characteristics made McGuffey’s work distinct from other readers of the day. First, it included more illustrations than was common for school books at the time. Second, it was a complete language arts curriculum integrating spelling, speech, comprehension, and word studies.

The primer began with the alphabet and phonetically taught single syllable words. Not as successful as the series that followed it, the primer was pulled from publication shortly after its introduction. The content of the first reader moved on to more difficult words and introduced simple sentences. The second reader progressed to multi-syllabic words, and the stories grew more complex as the book progressed. Comparable to the level of junior high school material, the third and fourth readers taught thinking skills and included selections from authors such as Irving, Byron, Jefferson, and Shakespeare. A Rhetorical Guide was added, which was later developed into the fifth and sixth readers. Literary selections in these volumes were comprised of portions of the Bible and the works of Longfellow, Dickens, Addison, and many others. In addition to the variety of literature, these higher level readers incorporated elocutionary exercises and lessons on such broad topics as farming, science, history, and biography. 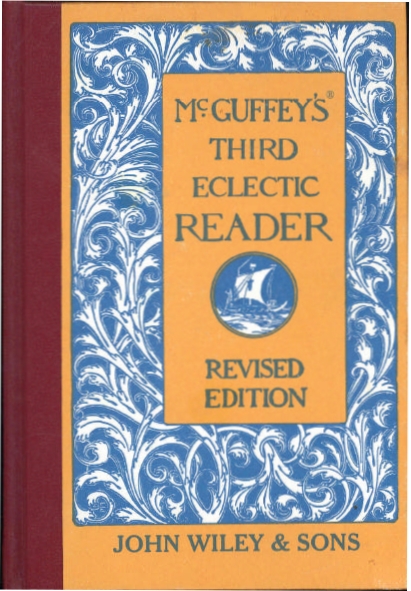